WHAT WE HIDE: THE MASTER MAGICIAN WHO DISAPPEARED 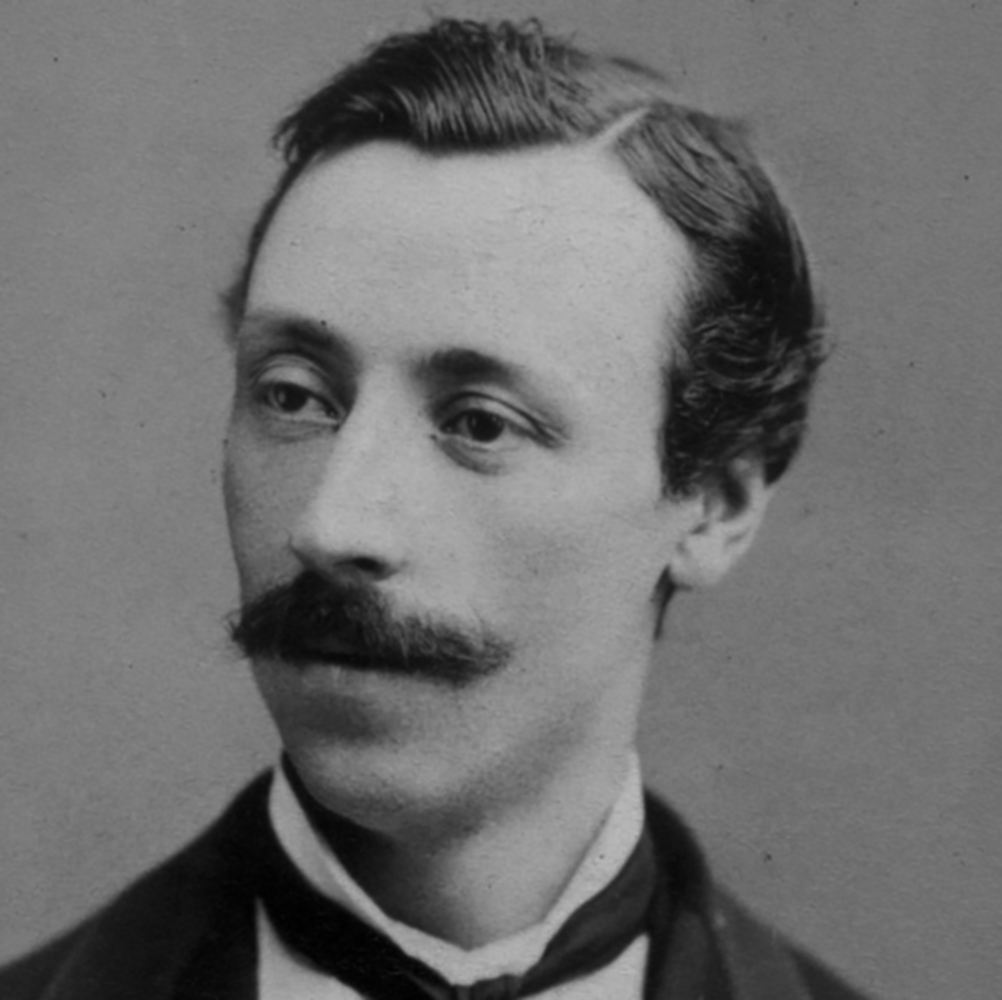 It all began when I was writing about Thomas William Tobin in my book Hiding the Elephant. I was looking for some biographical information or a photo, or an obituary… or… something. But all I’d found were the same two or three sentences that had been repeated over and over again in more than a century of magic books. He was born in London in 1839, trained as a chemist, apprenticed to an architect, and hired as an assistant to Professor John Henry Pepper to mix the oxygen and hydrogen for the spotlight that powered the Polytechnic’s Pepper’s Ghost Illusion. Soon, Tobin invented the Proteus Cabinet, The Sphinx, and several other popular and influential illusions around 1865, when he was 26 years old. He worked as a lecturer. And then… some time around his 34th year… he just disappeared.

He vanished so effectively and mysteriously that the cagy John Nevil Maskelyne insinuated an entry into the Ninth Edition of the Encyclopedia Brittanica, under the heading “White Magic,” suggesting that Tobin’s inventions in London may have been copies of Maskelyne’s earliest creations when he was a young man, working as a jeweler in Cheltenham. This was an outrageous claim. Maskelyne’s optical illusions were clearly taken from Tobin, and the dates,  patents, reviews, and recollections of British magicians, all proved it. But it’s interesting to note that, by 1883, when the Ninth Edition appeared, Tobin was so safely “gone” that Maskelyne sensed an opportunity to appropriate Tobin’s legacy in the magic world, and made a stab at rewriting history.

Tobin’s work was always impressive, and his training as as an apprentice architect must served him as as developed his stage illusion. For example, the patent drawings for Pepper’s Ghost (drawn before Tobin was involved) have a mistake in the calculation of the angles, which show a hurried and imprecise understanding of the invention. But Tobin’s later patent drawings of Proteus—which he supervised himself—show an incredible expertise, with calculated sight lines that were absolutely perfect. (Later generations, who didn’t study Tobin’s drawings, didn’t always get it right.) Tobin met Robert-Houdin in France, were the old  magician welcomed the young wizard. Tobin left the Polytechnic with Professor Pepper and they set up their own show at Egyptian Hall in March, 1872. (This was years before Maskelyne arrived in London and took a lease at Egyptian Hall.) Tobin demonstrated some of his illusions, and announced a brand new effect, Palengeneisis “The Destruction and Phoenix-like Reproduction of a Living Being before the Audience.” Tobin also lectured on diamonds. He had worked as a consultant for a diamond mining  company shortly after his work at the Polytechnic.

We don’t know if Palengenesis (later Palingenesia) was a success, or was even performed during those engagements; when it was later performed in London by Dr. Lynn, it was very freely adapted from Tobin’s idea and it used a different method. But the Pepper show at Egyptian Hall was a failure, so Pepper and Tobin took their show to America, where they hoped to find financial success. The large illusions were difficult to transport, and the show was costly.  By the time they reached Louisville, Kentucky, they were out of money. Pepper sold his props and returned to England. Tobin, a bachelor who was intrigued by his American friends and associates, decided to stay.

Tobin performed with P.T. Barnum at his New York Museum in the “Lectorium,” a small theater. It doesn’t seem that he performed Palengenesis, but did present his favorites from London, including The Sphinx, Proteus, and a Dissolving Statue that was inspired by Pepper’s Ghost. (I was lucky enough to locate a portrait of Tobin taken from the time he worked with Barnum; it’s the only picture we’ve ever had of this famous magician.) In 1875, he co-starred with Alexander Herrmann in Boston, presenting Palengenesia under a more interesting name, “The Frankenstein Mystery.” When Herrmann left Boston, Tobin remained behind and, for a short time, exposed Spiritual Seances during an appearance at a Boston theater.

His days in show business were ending. A Louisville friend, Colonel Young, recommended him to chair the department of Chemistry at the Central Kentucky University in Richmond, near Louisville. Tobin organized courses in physics, mineralogy and geology. At Richmond, he worked to install the city’s phone system, and invented and built a precise pendulum, which cold measure the rotation of the earth.

But in 1883, when he was just 40, he was stricken with tuberculosis.  He died in Louisville, mourned by his many friends and students.

Tobin’s connection to Louisville was lost for over a century. In searching for him, I followed him to the American appearances onstage, but then lost track of him in the history books. The records from Central Kentucky University (now Eastern Kentucky University) provided the answers, and Tobin’s full story could be told. Some of his creations, like his pendulum, had become treasured elements of the University’s history.

Thomas William Tobin was buried in an unmarked grave in the fashionable Cave Hill Cemetery in Louisville. One day, when I was speaking to Lance Burton, I asked him about Cave Hill. “I used to play in there, when I was a kid,” he told me. Lance was thunderstruck that the great Tobin had been buried there and, indeed, had been a resident of Lance’s home town. During his career, Lance made expert use of Tobin’s many inventions (with Lance’s distinctive and ingenious touches), and these were featured in Lance Burton’s Las Vegas and television shows. 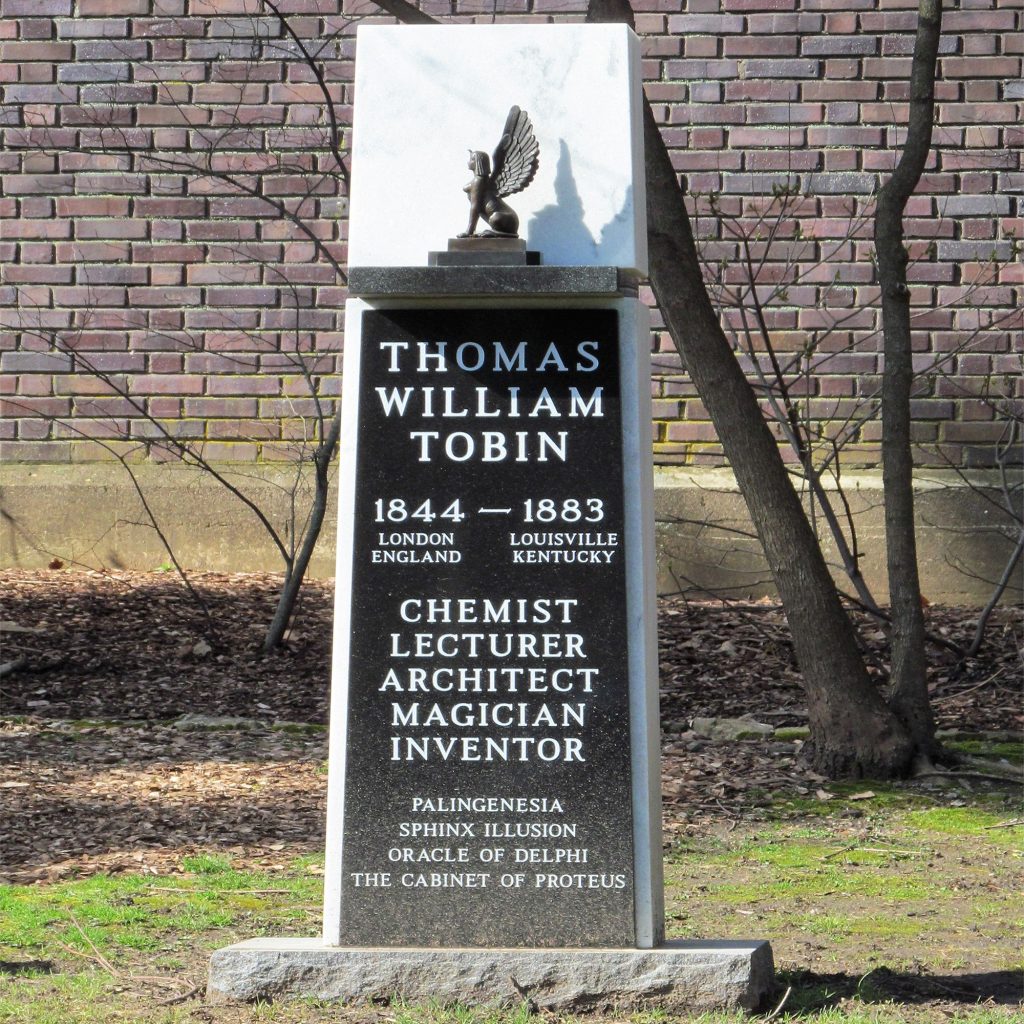 A few years ago, Lance surprised me by asking me if I’d like to come to Louisville to commemorate the gravestone for Thomas William Tobin. Lance had decided to officially mark his grave and recognize this long-forgotten genius of illusion. So, I went, and that afternoon I explained Tobin’s many achievements. Lance, typically gracious and generous, commissioned a striking white marble and black granite stone (complete with a sphinx) that lists his most famous creations. The ceremony was marked by the Louisville magicians. And now, the mysterious Tobin is now officially “on the tour” of Cave Hill, where he is recalled to thousands of visitors. Other notable graves at Cave Hill include Muhammad Ali.

Magicians benefitted from Tobin’s ingenuity for for more than a century and a half. After the Encyclopedia Britannica, John Nevil Maskelyne’s greedy claims didn’t find any traction, so he seems to have given up. Despite Tobin’s brief career in London, Maskelyne must have discovered that the young inventor’s reputation had been firmly established. Still, it was Lance Burton who made up for magicians’ carelessness or impositions. He was the one who elegantly said thank you, insuring that Tobin will be remembered for his important work.