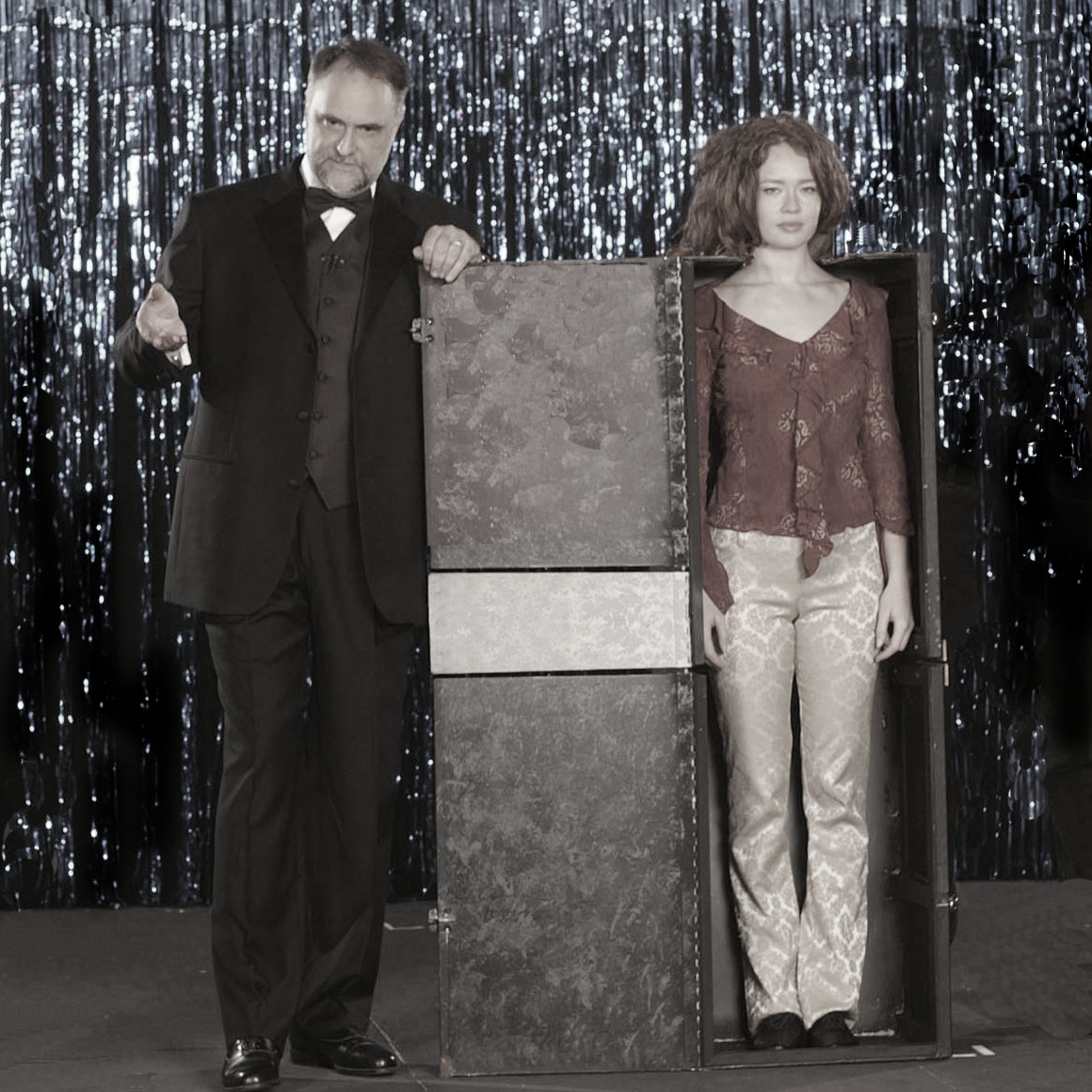 In 1980, when I was working on the Magic Inc. edition of Jarrett, I went to New York, where Charles Reynolds arranged for me to meet Arthur Leroy, who knew Guy Jarrett. Arthur was a real character. He was a former puppeteer and magician who had written wonderful, evocative stories about magic’s golden age, in The Sphinx and Hugard’s Magic Monthly. He was a wiry, crusty old fellow who was already ensconced in an armchair, looking quite regal, by the time I arrived at Grove Court and opened my notebook. Arthur started our conversation naturally suspicious of me, a young kid who was asking a lot of questions, and now said that he was going to re-edit Jarrett’s book. But Arthur had a lot of great stories, and that afternoon, Arthur began talking and quickly warmed to the subject, offering me tantalizing facts about Jarrett and the New York magic.  He was an old friend of Milbourne Christopher, whom he called “Millie!” (If you knew Christopher, the name was hilariously inappropriate.) I remember, for example, his observation that Jarrett was an almost perfect match for the actor E.G. Marshall. (“He looked just like him! Don’t you think so?”)

Arthur gave a wonderful, detailed recount of Houdini’s Vanishing Elephant at the Hippodrome. He told us exactly how it worked (a method that hadn’t really been recorded) and acted out the steps… The way that the elephant entered, the way that Collins, Houdini’s assistant, followed the elephant inside, the way that Houdini offered a peanut to the elephant through a window in the cabinet, and the way that Collins pushed open the doors at the finish. He remembered it perfectly, he told  us. As I recall, Arthur even stood up to illustrate some of the action.

When he left, Charles Reynolds, Stanley Palm and I discussed Arthur’s account of the elephant trick. It was so good, so clear, that it was hard to believe it wasn’t accurate. At the same time, it didn’t really match any other account. We finally dug out some reference materials and looked for information about Arthur’s age. A vain little man, he clearly had been lying about his age, but even so, we couldn’t make sense of how he could have remembered these details from 1918, when he would have been six or seven years old.

So, the point is that Arthur was a fascinating writer and an experienced magician, but he was also a bit of a fabulist when it came to magic history. A few of his exaggerations are now apparent in his Sphinx articles. He knew how to tell  a good story, and he knew how to make  it sound true. So I left that afternoon with a notebook of interesting possibilities, as well as a lot of question marks.

One of Arthur’s stories about his friend Guy Jarrett was his description of an illusion show that Jarrett was going to produce. He thought that the name of the show might have been, “Jarrett’s Illusions.” Arthur remembered that it had a number of original Jarrett illusions in it, most notably Jarrett’s Sawing in Half, which was the predecessor to the Thin Model Sawing. Arthur thought that the Sawing might have been built in the 20s, and the show may have been done in the late 20s. He remembered that Frank Ducrot, the owner of Martinka’s and the popular performer, was to “front” the show, performing his own specialties like the Egg Bag and the Thumb Tie. Arthur related that the show was done—maybe only one time—at Maurice Bliss’s Idle Hour Playhouse in Queens, and was never seen again. When I asked more questions about the show (“What other magic was in it?”), Arthur just shrugged.

The account was fascinating. I didn’t know quite how much to trust his recollections. In subsequent years, I’ve found Arthur’s previous writings about this show, in Hugard’s Magic Monthly, where the narrative was part of a story about Frank Ducrot. It seems that Arthur’s memory was better at that time, in 1956, when he wrote up the story. Here’s what he then had to say about “Jarrett’s Illusions.”

Ducrot was a talented performer and a favorite of his customers at Martinka’s, but he was a careless businessman and his finances were always a disaster. His friends would come through with books, new collections of tricks, that Ducrot would sell at Martinka’s, so Ducrot had enough money to pay his rent or buy groceries. In 1939, Leroy had done just this, with a little booklet called The Grand Finale. It included a trick of the same name, a sort of three-way coincidence card trick with three borrowed decks.

At the same time, early in 1939, Guy Jarrett had been assembling his illusion show, which had been supported by backers. Ducrot was hired to host the show. The Annual SAM Convention was scheduled for New York that spring, (the World’s Fair was also in New York that year) and the show was being assembled just before the convention. Jarrett and Ducrot had a chance to mount it at the Idle Hour Playhouse, where it played one performance for the producers.

When Leroy recounted the story in 1956, he didn’t speculate about the show’s title; he said he wasn’t sure what it was supposed to be called. But he recalled that friends of Ducrot unofficially started calling the show “The Grand Finale,” as it seemed to signal Frank’s change of fortune. It seems that Ducrot’s luck was really changing: the booklets of tricks had eased the financial pain at Martinka’s, the Jarrett show looked so promising that there was talk about it being produced and providing a starring role for Frank Ducrot. But just after the try-out performance, Ducrot suffered from pains and checked himself into the French Hospital in New York City. Days later, he died.

Plans for the show were scrapped. A Martinka’s ad had already been printed in the SAM program, which told attendees to “Ask our Mr. Ducrot about “The Grand Finale.” When magicians arrived and found that their beloved friend Frank Ducrot had just died, the mysterious ad took on a special significance.

It’s clear that Arthur was telling me the same story—now focusing on Guy Jarrett’s failed illusion show. At the same time, in centering the story around the Sawing in Half, Arthur speculated that it may have happened in the 1920s. In 1980, he wasn’t sure of the date, even though, in Hugard’s, the illusion was clearly tied to Ducrot’s death on May 24, 1939.

This creates an interesting timeline for Jarrett’s Sawing in Half illusion. Jarrett was in Chicago from 1932 to 1933, and then returned to New York to work on the Broadway show “Halfway to Hell,” which opened in January, 1934. When was his Sawing invented? In his book, it seems that Jarrett built his version of Selbit’s trick for a customer who wanted a Sawing illusion. Presumably, this Selbit-inspired version was Jarrett’s improvement, circa 1922 to 1924, when the Sawing illusion was raging across America. But there was no discussion of Jarrett’s new Sawing around this time. Nor was it something he discussed with magicians in Chicago.

This suggests that the illusion was created when he returned to New York, circa 1934. It was available to describe in his book, which was written through 1935 and 1936. This makes perfect sense, as the illusion was built and photographed for the book. (Many of the illusions, which he then didn’t own, were mocked up in drawings, or composite photographs. But the Sawing was one of only several illusions Jarrett built to actually photograph.) That means that when the book was written Jarrett had the illusion, and when Ducrot’s show was produced, it would have been available to include in the program.

GUY JARRETT’S INNOVATION. What was his Sawing? Take a look at the photo at the top of this page. In 2001, I redesigned, rebuilt and performed Jarrett’s Sawing from his book. The box, shown to the audience and measured, is just large enough to hold someone. For years it was a lost (or, should we say, unexplained) illusion, so I was proud to put it in front of an audience. I then performed it several years later at the Magic Castle. It was redesigned for Alex Ramon, who uses it regularly in his performances.

My shows are experiments, but Alex’s shows are really “under fire,” professional examples of illusions that are used to amaze audiences. He has had a chance to demonstrate just how practical and efficient Jarrett’s illusion really was. I hope you get a chance to see him perform it. He does a great job with it. I think it’s safe to say that people who, for decades, have been evaluating it from Jarrett’s book have gotten it very wrong.

Here’s a photo of the trick in action, when I first performed it. The lower photo shows Jarrett’s other incredible Sawing effect…. 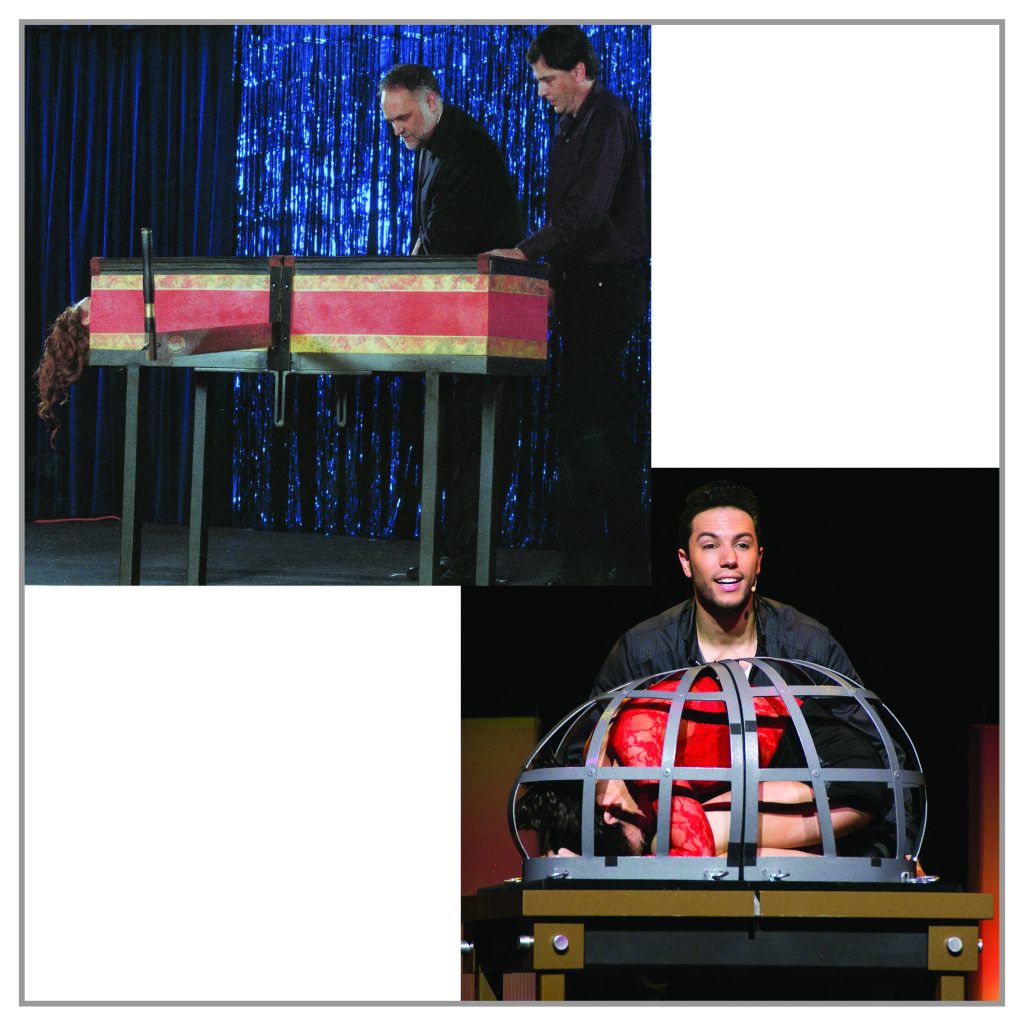 GUY JARRETT’S EGG. One of the most puzzling illusions in his book was something he called Sawing an Egg. It was an especially small, amazingly impossible penetration effect in which an assistant was locked into a tiny metal container, and then apparently cut into two pieces. After it was described in his book, Jarrett’s illusion was built by Edmund Spreer. After that, the illusion was neglected. In 2009, I had it rebuilt for our Conference, and demonstrated  it in performances.

It’s interesting to me that Jarrett was clearly moving in the direction of smaller, more practical illusions in the 1930s, at the time that he was assembling material for his book. It makes us wonder what else we would have seen in “Jarrett’s Illusions,” or whatever that one-time-only performance was really called. What was he working on? What sort of illusions did he imagine in the future of magic? If only Arthur Leroy could have recalled some of the other state-of-the art Jarrett illusions that he saw at that one performance in 1939.

I redesigned and demonstrated the mysterious Egg in 2009, and it is also now in the repertoire of Alex Ramon (when he isn’t performing Jarrett’s Sawing, of course). You can watch his performance of it from “Masters of Illusion,” right here, complete with an introduction about the iconoclastic Mr. Jarrett.I

In the next blog, Jarrett Speaks Part 4, I’ll wrap up with a brief description of what I think Jarrett meant to my work in magic, and what it means to our history of magic. You’ll be interested to consider exactly why his work so different… and so important.