WHAT WE HIDE: CHEERS! (MAGICIANS POUR YOU A DRINK) PART TWO 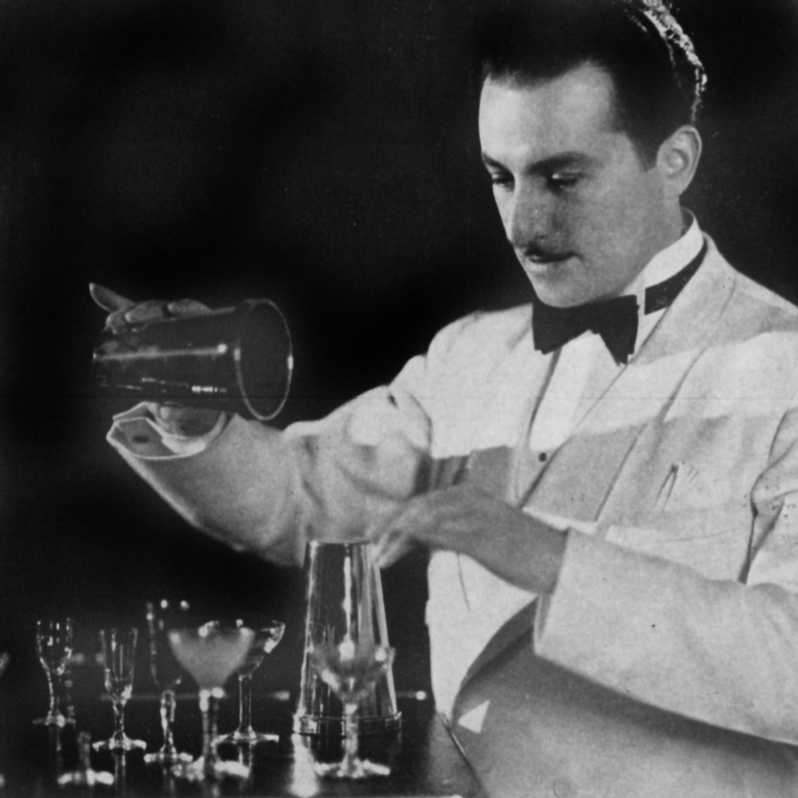 Every magic book will tell you that the secret of the “Any Drink Called For” routine is a trick bottle or a trick kettle. The special metal bottle was, for decades, known as the “Houdin Bottle,” even though Robert-Houdin probably didn’t invent it, but did popularize it in his own performances. The idea is that, through the use of air pressure, the contents of the bottle can be controlled so that different drinks can be poured for the audience. The bottle is the perfect subject for an engraving in Hoffmann’s Modern Magic. But actually, the bottle is only part of the secret of the act.

As Alan Wakeling explained it to me, it’s the alcohol.Everyone’s experienced a diluted drink. There was too much ice in the glass, or the bartender is trying to get away with something, so he’s watered it down. You can quickly taste when it’s not a real drink. “It’s the alcohol that makes it work,” Alan explained. If you put a splash of an expensive liquor in the bottom of a glass, like Creme de Menthe, and then top it off with a neutral, flavorless, strong alcohol (Alan used to use vodka in his act), the alcohol content of the vodka effectively carries the flavor of the Creme de Menthe, and the strong alcohol content convinces you that it’s an authentic drink. It works pretty well.

This was the other important secret used  by Robert-Houdin, David Devant, and dozens of other magicians. They weren’t watering down drinks, they were topping them off with different neutral spirits. Their tables were carefully arranged with an array of cheap glassware, ready for the audience requests. In those days, cheap glasses were thick, so it didn’t take much to fill them up. The magician would pick up the glass, curling his fingers around the bottom of it, containing the drink. Then, as the glass was topped off, he’d open his hand, showing the contents.

The act is generally presented as the audience clamoring for drinks, and the magician quickly responding to each request, pouring out everyone’s order. It doesn’t quite work like that. If the audience is really energized, if they scream for various drinks, chaos rules and it’s an easy act to perform. The magician is always right when he pours a drink, and gets credit for his responsiveness. But if the audience goes silent, if only one or two people distinctly call for drinks, the magician can’t pick and choose his way through the routine, and the act is hard to perform. As Alan explained it, the trick was to flip the formula after a few drinks, to give the impression that you’re responding to the audience, but to actually lead them through the act. Instead of suggesting that people should call for drinks, the magician takes command of the situation and begins pouring drinks. “Who wanted this Martini?” he asks. Someone holds up his hand. The prospect of a free drink changes the nature of the routine.

Charles Hoffman was one of the most popular acts in vaudeville. He worked as “Think-a-Drink Hoffman.” His formula for the act was ingenious. He told the audience that all they had to do was think of the drink they’d want, he’d read their mind and pour it out for them. “Who was thinking of a Gimlet?” he’d ask. Seconds later, an attractive assistant was carrying a tray into the audience, delivering the Gimlet that he’d just poured from his shaker. You can imagine how efficiently this worked.Hoffman’s act featured a small army of neatly dressed assistants, the waitresses who marched up and down the steps, handing out drinks. He didn’t focus on a bottle or a kettle, but did a variety of effects using a glass pitcher or a cocktail shaker. For his finale, he would pour an enormous stemmed glass—really a kind of vase—of Bromo Seltzer. This was the bubbling, foaming drink that you’d have after a hangover. As the glass filled with foam, Hoffman would hurl it across the stage, where it was caught by an assistant. It was a sensational effect.

Alton Sharpe was a longtime Chicago magician, and an old friend. I used to see him at IBM or SAM meetings in Chicago when I was a kid. Years later, I knew him again when he lived in Los Angeles. He’d had a varied, colorful career. (He was named in the Warren Commission Report on the assassination of Kennedy; Al was a show business associate of Jack Ruby in Dallas, along with Tom Palmer!) One night at the main bar of the Magic Castle, I was sitting with Al. I think we started discussing what was in our glasses, and soon he was telling me about meeting Charles Hoffman and buying his act!

This was the story. Al was working in Texas when an older man approached him and said that he had also been a magician. “You probably never heard of me,” he said. It was Charles Hoffman. Of course Al had heard of him. Hoffman had retired to Texas. As they talked about the bar act, Hoffman told him, “I’ve got the whole act in storage. I’d like to get rid of it some time. If you’re interested, I’d sell it to you. But only if you buy the whole thing, not pieces of it.”

Al agreed, and brought a truck to Hoffman’s warehouse. He didn’t tell me what he paid for it. But he was stunned by the stacks and stacks of crates and boxes. “There was so much shit! I couldn’t believe it, and I couldn’t believe he had been transporting all of that across the country during his career.” Al bundled up the boxes and unloaded them in his own storage. It was months later when he actually had a chance to look at the contents.

“There was almost nothing there,” he shook his head, recalling it to me. “But you know, he was a perfectionist  He had boxes and boxes of barware. Small, cheap glasses. Exactly the glasses that worked best. You see, he’d give away the glasses, and almost never got them back at the end of the show. He’d paid pennies for each glass, but he had to carry a supply of it across the country.” There was a very large, very elaborate wooden bar, which held the shelves of glasses, the pitchers and shakers. There was just a little bit of magic apparatus, the elements of the act. Nothing special. And there were crates and crates of costumes. “You see, he’d hire six or eight girls in every city, dancers. So he had to carry multiple costumes of each size, so that he could fit them and they all looked like they were part of the act. He was a perfectionist, and the girls had to look just right.”There was also a stack of cardboard boxes. They were filled with bottles and bottles of… Everclear! If you’ve ever heard of Everclear, it’s probably because it was the stuff that Fraternity boys used to pour in their punchbowls for parties. It’s incredibly cheap, incredibly strong (!) grain alcohol which is virtually undrinkable, but can be mixed with fruit juices.

That’s what Hoffman was pouring into those glasses. Everclear! (Realistically, he probably used some formula of water and EverClear, but one way or another, his drinks packed a wallop!)

Al stared at the cases and crates for a long time. He threw away the costumes and glasses, destroyed the bar, and went to a local bar. “Do you ever use  Everclear?” he asked them. The bartender said they sometimes used it. “I’ll bring a couple of boxes and make you a great deal.” He delivered the boxes a couple of days later and soon after that he had a knock on his door. There were two agents from the Texas department that oversaw alcohol sales. “Mr. Sharpe, we’ve been told that you’re selling alcohol without a license.”

Al told me that he felt like an idiot. He showed the bottles to the agents and explained his situation. “Well, we understand, but you can’t sell these.” So, over the next weeks, he drained the bottles in the sink and and threw out the empties.

But there was one more secret. A wonderful secret.

“In with all that stuff was a tiny leather bound notebook,” Al told me, describing a small rectangle with his fingertips. “It was very mysterious. On each page was the name of a theater, a first rate presentation house or vaudeville theater. And then, just a few pencil notes. It might say, ‘State-Lake Theater, Chicago. Five steps from Stage Right Proscenium. Eight steps from Stage Left Proscenium.’ Those  little calculations were the only things in the book.”

I frowned. “I don’t get it. Did you ever figure out what that was?” I asked him.

“Oh, yes, I did!” Al laughed. “It was the Bromo Seltzer. Hoffman knew exactly how far he could throw that glass of Bromo Seltzer. He had measured it out on every stage he ever played. He knew that he would stand against the proscenium and take five steps towards the center of the stage. The assistant would take eight steps from the other side of the stage. And that’s how far he threw the glass! You see, he was a perfectionist.”