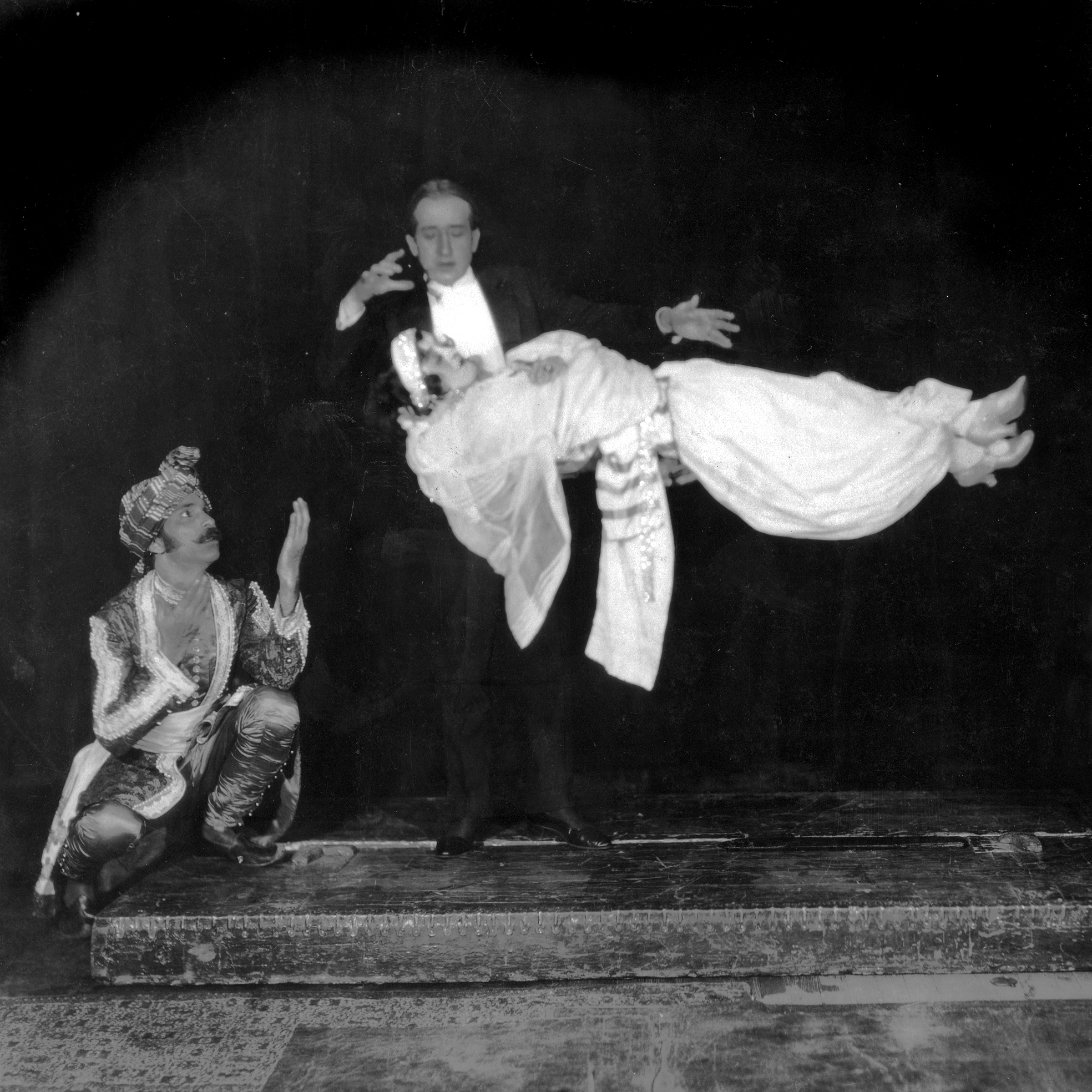 One of the great moments of America magic—established over decades in theaters across this country—was Thurston’s famous Levitation of Princess Karnac. I’ve written about the history of this amazing illusion in several books, including Hiding the Elephant. The illusion was acquired through espionage, or purchased like a rare jewel, or stolen like plunder, through the early years of the 20th century. It was lusted after, guarded, treasured, and it made the reputation of some of the greatest magicians in history.

My late friend John McKinven was a fan of Thurston’s show when he was a boy, and we had a number of conversations about the music that accompanied the magic. John had worked very hard to find the music that he’d heard as a boy. We can read that Thurston used the melody of Schumann’s “Traumerei” (“Dreaming”) early in his career. As Thurston finished the illusion, when the lady was covered with a cloth and “vanished, like a fading cloud” (according to his posters), the melody switched to “Meditation” from the Massenet opera, “Thais.” Both of these are easy to find, and if you listen to them, you can picture how the illusion was enhanced by these melodies.

But John McKinven discovered that Thurston replaced “Traumerei” and featured a specific melody in the Levitation, all through the 20s and 30s. It was a song called “Love Song.” The composer was “T. Wright.” John was unable to find any other information, any recording or sheet music. The song remained essentially unknown for almost 90 years.

When I edited the Thurston Workbooks for Mike Caveney and Maurine Christopher, the pages included a list of music cues for the Thurston show, circa late 20s. Those cues explained, in detail, when “Love Song” began as Mohammed entered, then accompanied the levitation (with a tremolo as the hoop was examined), and then concluded when Fernanda was awakened. “Love Song” was indeed the melody that played throughout the famous Levitation.

But what was “Love Song?” Eventually, hints started turning up in archives on the internet. Recently I came across some references to it, including the name of at the composer, which allowed me to locate the sheet music in archives. But it seems that there’s never been a recording. And so, at last, here is an original recording, beautifully played on the piano by the talented magician and musician, my friend Robert Ramirez. You’re hearing it for the first time since Thurston’s show was packed up in cases in 1935. I’ve accompanied it with a newly-tinted photo of Thurston performing the illusion.

The melody and bridges are fascinating; it’s easy to imagine how this was a theatrical showpiece and how it perfectly accompanied the famous illusion. Robert recorded it on a piano, but noted that the orchestrations were elaborate, using the strings in the theater orchestra to provide the melody.

The name “T. Wright” created the confusion. The composer’s name was actually Minnie T. Wright, and she wrote incidental parlor music and short themes, the sort of music that  used to accompany silent films. More than likely, the name was carelessly recorded as “T. Wright” as there weren’t many women composers. Its usefulness in silent films may explain why “Love Song” (actually, the title seems to be “Love-Song”) sounds like a category instead of a title. It was published in 1920, which means that Thurston used “Traumerei” before that year.

The Thurston show actually incorporated a lot of popular music, contemporary compositions that the audience would have heard in shows, or on the radio, or played by dance bands. Those included Sousa marches, Broadway songs and Tin Pan Alley hits. That same music list from Thurston’s show includes dozens of different song titles, including these popular melodies, still easy to find on YouTube videos. (Look at that! There’s even a hit song from 1929.)

When I wrote, “there’s never  been a recording,”  add this weird footnote on on “Love-Song.” In 1933 Louis Armstrong made a recording which is called “Laughing Louie.” It features his band as they banter about songs, laugh, and play short riffs on their instruments. (You can find “Laughing Louie” on YouTube, including some remastered versions.) Just after 2:00 into the track, Armstrong says, “Now get a load of this, you cats!” and he plays a few bars, a bright melody on his trumpet. Musicologists who have studied “Laughing Louie” have identified this song as his jazzy version of “Love-Song” by Minnie T. Wright! It’s interesting to consider  that, at the time Armstrong and his band were recording that, Howard Thurston was using the same melody as Princess Karnac floated over the stage.

As for this recording, I’m grateful to Robert Ramirez for starting with the sheet music and producing this evocative recording, so we can finally hear the melody. As a young John McKinven listened to this music, Thurston’s spoke with a wonderful, purling, humming bass voice, which turned the words into hypnotic incantations…

“We have brought with us from Secunderabad, that Ancient Temple in India, by special arrangement with the British government, Abdul…. Abdul from Secunderabad, Hither ho!… We also have with us Mohammed…. Mohammed the yogi from the temple of Benares on the banks of the Ganges…. Fernanda… I command you to rise… in the name of the yogi and the wise men of the Orient… I command you to rise… Safely… Securely… Rise… Rest, Fernanda… Nothing above, nothing below… Rest.”