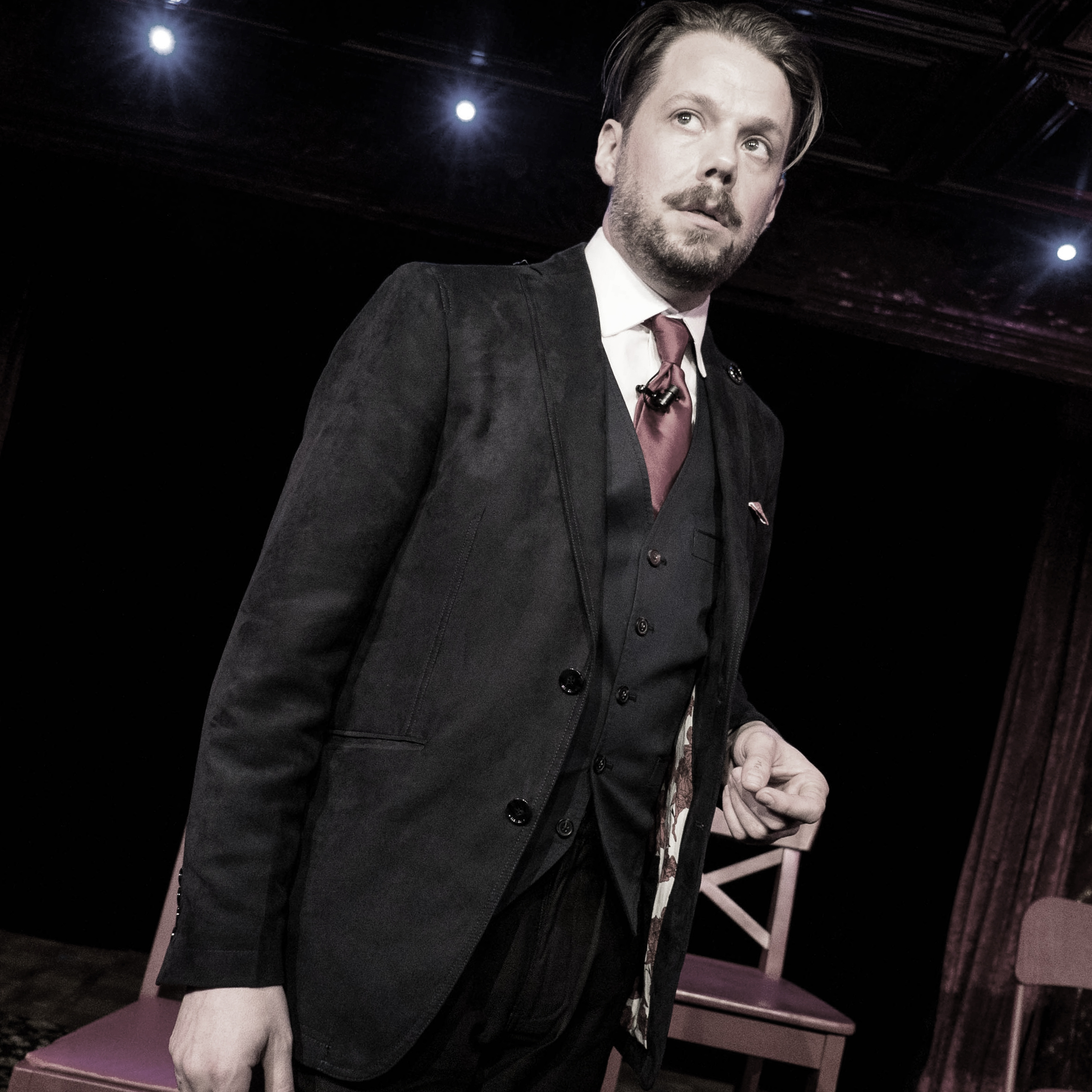 THE SHOW WITH THE RED CHAIRS

Just five years ago, several of us tried an interesting experiment. Or maybe I should say, I tried an interesting experiment and my friend, the talented actor and director Benjamin Schrader, began a lot of work. The project was a theatrical interpretation of magic, tuned to current events. It was called “Lessons in Dishonesty.” I wrote it and presented it; it was directed by Robert Ramirez. We put it together late in the summer of 2017, and presented it in 50-minute workshop performances.

I still have people ask me about “the show with the red chairs,” (or some version of that phrase), and it earned devoted fans. It’s a confession by Jarvis Lorry. Lorry is a witty, insightful, street-smart young advertising executive who had recently revolutionized the industry by being just a little more dishonest than all his associates. Based on his success, he tumbled through the worlds of political advertising, sleight-of-hand and espionage. For Lorry, the question that began to frighten him was, “What does the truth look like?” The show used a good deal of magic and mentalism to establish this “wunderkind’s” bona fides, and then a number of unexpected bits of truth to make the audience wonder what they’re actually watching, or if they actually believe anything they’ve just seen. But it wasn’t actually magic, it wasn’t actually mentalism. It was a show about someone puzzling over his mastery of dishonesty. As our little program noted, “The world’s greatest magician may not actually be a magician—just as you’ve suspected.”

Notice the red chairs! They were the little pieces of scenery that allowed us to make choices, invite volunteers onto the stage, and reenact little scenes in Jarvis Lorry’s rollercoaster career. As he moved the chairs around the stage, recreating his famous TED talk or his meetings at advertising agencies, as the audience became more assured about his precocious mastery of deception, they also realized that they were being badly deceived.

Not surprisingly, Ben was remarkable. His credits stretch from Broadway to Hollywood; his knowledge of magic is formidable and instinctive. He somehow created this funny, iconoclastic character which, to our surprise, became vital and real to our audience, even when they knew better. After four days of performances, I went back and rewrote the show, adding additional elements. It was scheduled for workshops with a couple of prestigious theaters, but I’m afraid that Covid doomed it all (as it did for almost any live theater in 2019). 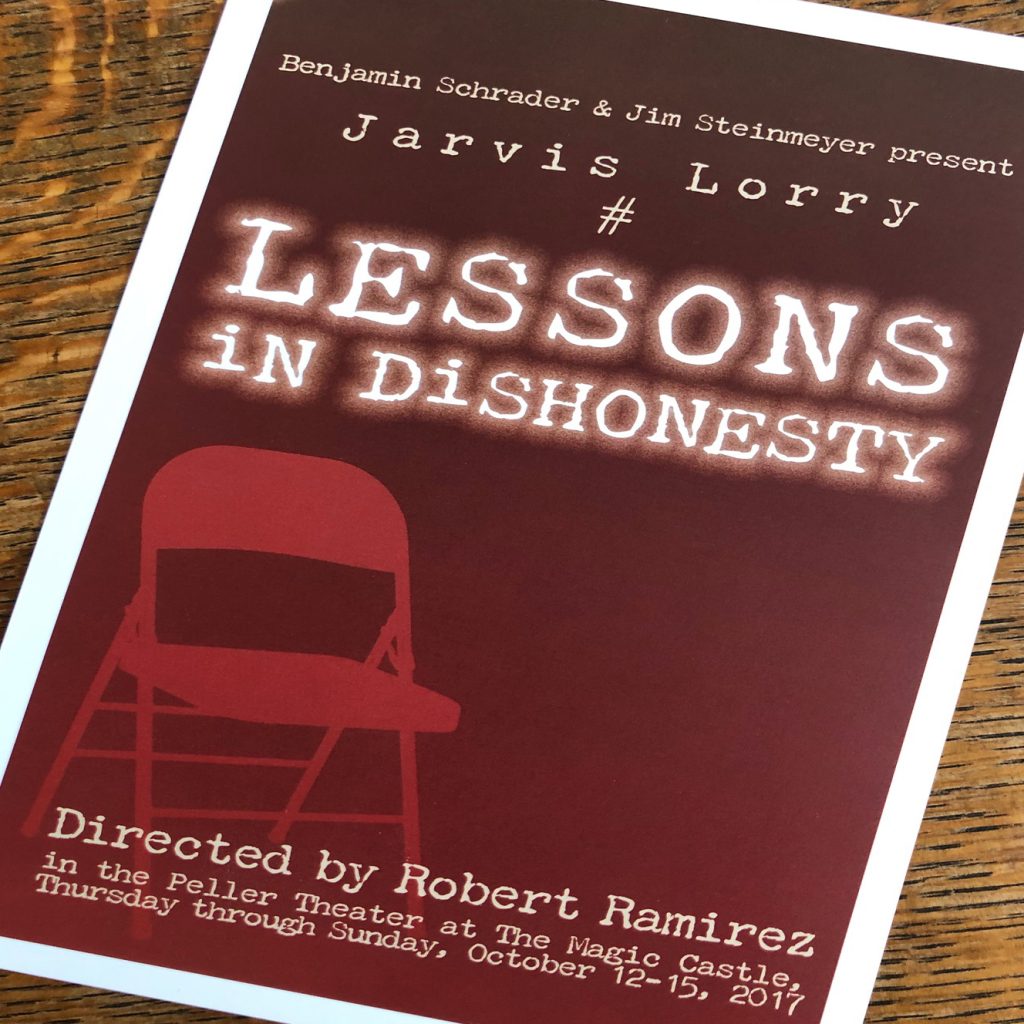 But I also think that it was more than that. Our combination of deception and honesty was weirdly unsettling for the time. I’ll explain it this way: I’ve often joked that, when people say that they are “overqualified” for a job, they are just finding a nice way of saying that they are “not qualified” for the job. Similarly, I think that when we award the vague compliment, that something is “ahead of its time,” we’re actually saying, “it’s not right for the time.”

In 2017, there was a flicker of intrigue about political honesty and deception. People were curious about how to evaluate those elements. A line in the script—which still sends a chill down my spine—had Jarvis Lorry discussing his work on a political campaign. He discusses the worthlessness of votes, the inevitability of marketing, and then said:

That’s not called dishonesty. That’s called life. We’re all looking for the shortcut, the system. It’s great when your president says, “I know how to get things done.” And then you’re horrified to find out how he’s planning on getting things done.

Since then, I actually think that we’ve all been drowned in political intrigue and expedient dishonesty. Over the last few years, I don’t think that anyone in our country could really imagine that deception is fascinating, or artistic, or worthy of celebration. In recent years, it has been merely tiresome, a relentless assault.

Yup. Jarvis Lorry was definitely “ahead of his time.”

But he’s not gone forever and we do still talk about the red chairs. Lorry definitely had things to say, and his first-person adventures with the truth were nicely unsettling. Late in the show, you could see Lorry struggling to explain what he’d experienced, after being battered and buffeted as a popular culture warrior. In Ben’s expert characterization, Lorry paused slightly, looked out at the audience and realized what he’d learned about “the truth.”