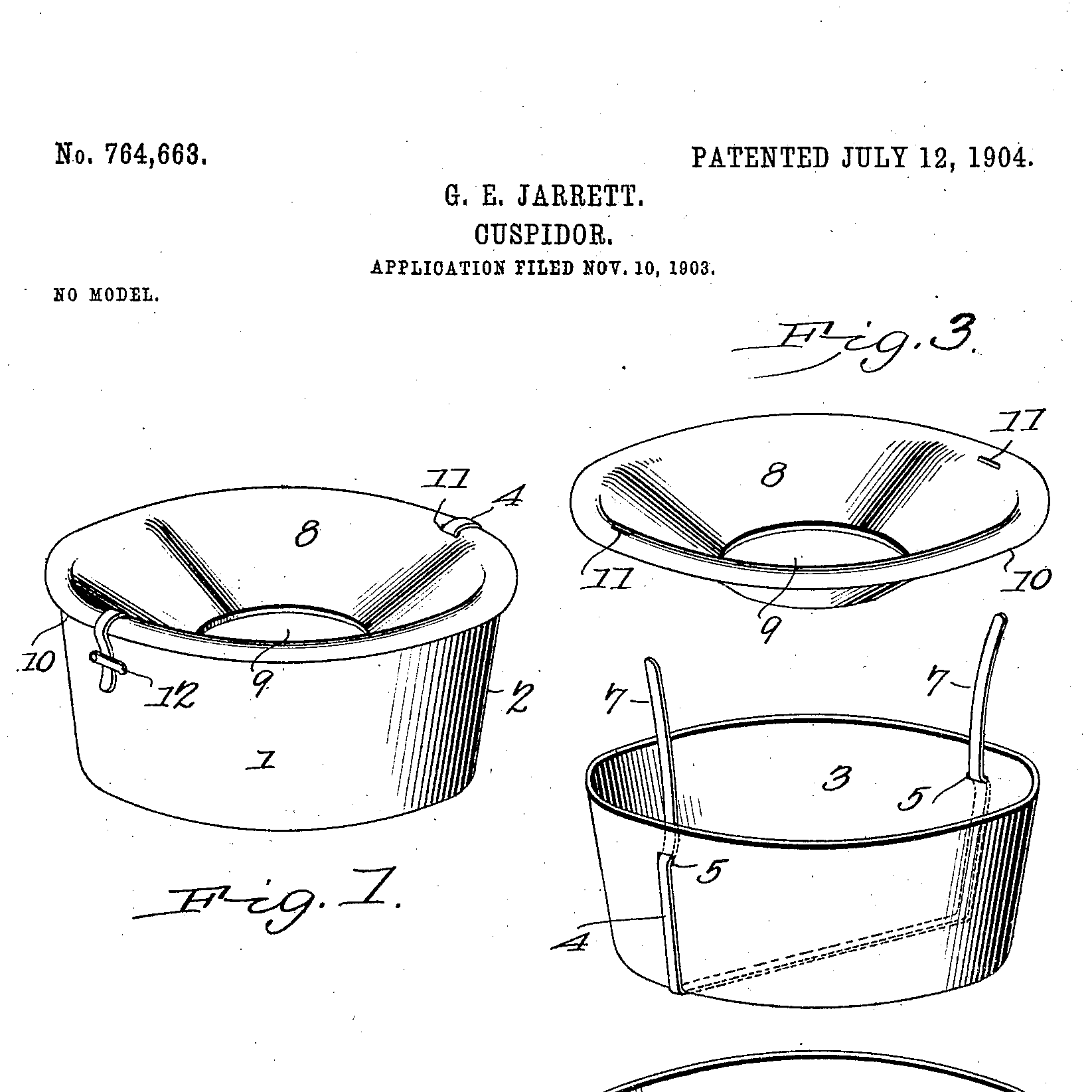 GUY JARRETT… WHAT’S IN A NAME? In 1881, when he was born in Belmont County, Ohio, he was christened “Giard Ellsworth Jarrett.” Giard? Well, it’s an old French name, but it didn’t stick. I find him using the name “Guy” consistently in official documents through his life, so it seems that he never really acknowledged the name Giard. “Ellsworth” is a curious name as well. It’s interesting to note that two great magicians and magic creators had the middle name “Ellsworth,” William Ellsworth Robinson (who later became famous as Chung Ling Soo) and Guy Ellsworth Jarrett. The reason, I suspect, was the Civil War hero, Colonel Elmer E. Ellsworth. Ellsworth was considered the first casualty of the war, a Union soldier who was killed, at age 24, trying to remove the Confederate flag from a building in Alexandria, Virginia. He had been a personal friend and law clerk of Abraham Lincoln, who called him “the greatest little man I ever met.” For some time, Union soldiers lionized him with the cry, “Remember Ellsworth!” It would have made perfect sense for William Robinson’s family to award their new child with the name of this war hero; William Robinson was born eight days after Colonel Ellsworth’s headline-making death. Jarrett was born nine years later and five years after the end of the Civil War; Colonel Ellsworth was, by then, sharing honors with many thousands of heroic war dead. But, of course, there were, by 1881, many young men called Ellsworth, so it would have been a popular name in America, well-known to Guy Jarrett’s parents.

GUY JARRETT… INVENTOR. When he was in his twenties, living in Holton, Kansas, Jarrett tried his hand at a number of practical inventions, based on a patent and a rather official looking studio photo. His vacuum cleaner and his design for a cuspidor (which wouldn’t spill when it was tipped over) can be seen here. Both are curiously “Jarrett” in their designs, with bits of string or leather strap holding elements together. He did the same sort of thing in his illusions, using deliberately minimal materials in certain spots—not especially commercial, but no doubt practical. There were a number of foot-pump vacuum cleaners being invented at the time, and a number of practical cuspidors, as well. Curiously, Jarrett never used tobacco, and would have avoided the interior of a saloon, where cuspidors found their starring roles. 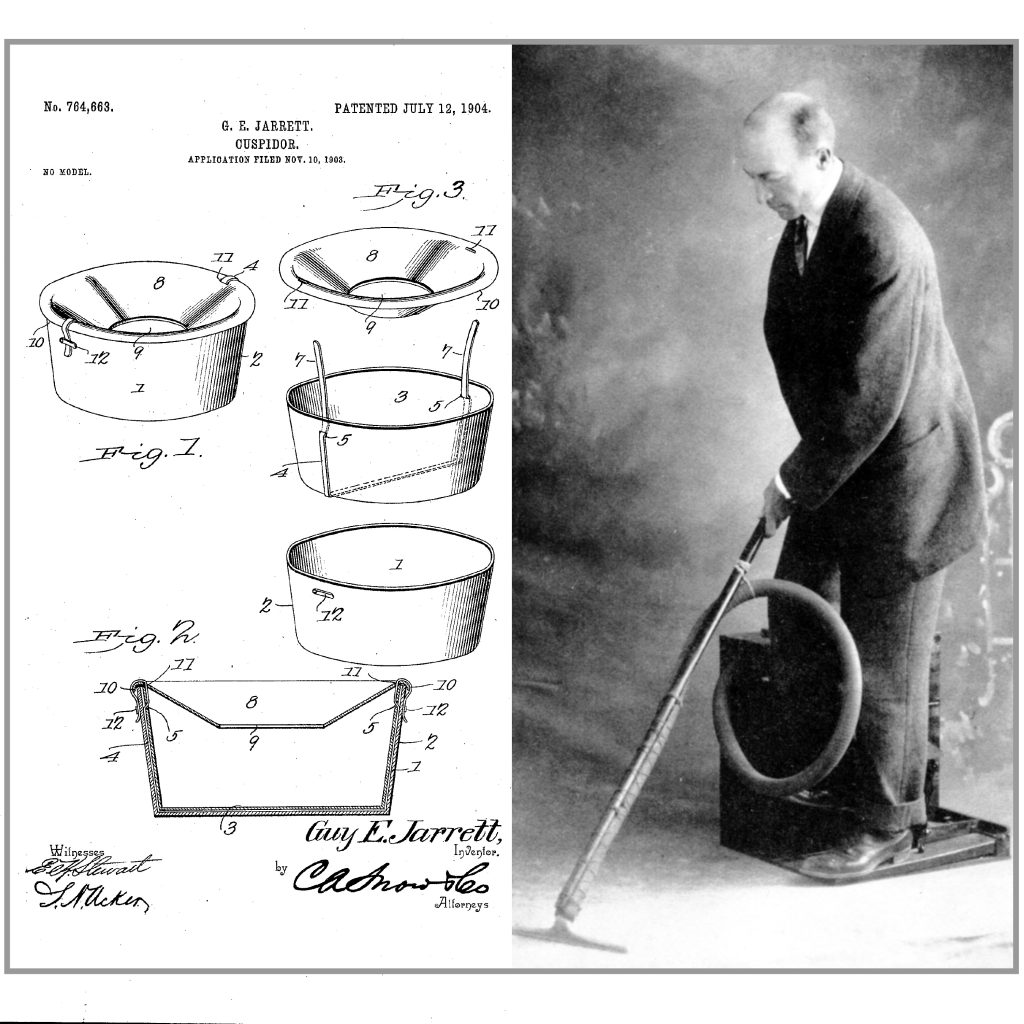 GUY JARRETT’S 21 PERSON CABINET. One of the most famous illusions from his book, brilliant for its sheer bravado, for the incredible routine and the unique secret, is the 21 Person Cabinet. I was lucky enough to see Jarrett’s original 21 Person Cabinet in a barn in Montgomery, New York, when I was preparing my book. Unfortunately, it was destroyed in a fire just several years later. The cabinet was built with steel angle and wooden planks. The sides were painted in wavy stripes, in three shades of brown paint. When Doug Henning produced his 1981 television special, he wanted to perform the 21 Person Cabinet, with Jarrett’s original presentation. John Gaughan built the new one, using information from the original prop and Jarrett’s description. For the television special, we produced 21 LA Rams Cheerleaders plus Bruce Jenner. I was the one responsible for getting the trick set-up for the performance; the whole thing brings back memories that produce a knot in my stomach! There was no camera trickery, no magic accomplished through cuts. The trick was really performed, with all 22 people produced from the box. Watch Doug Henning perform it here.

GUY JARRETT’S ROPE ESCAPE. In 200I, I had a chance to perform Jarrett’s Walk Out of a Rope Tie, that was illustrated in his book. It’s a great illusion, a very simple effect that creates a genuine surprise. In many ways, it’s typical Jarrett, and not like any escape that you’ve ever seen.

JARRETT’S LEVITATION. Having spent a lot of time examining the contents of his book, his specifications on his levitation created quite a mystery. It was the late John McKinven, the great magic historian and author, who first pointed out elements in Jarrett’s description, details about the hydraulic line that powered the trick, that suggested that the illusion was definitely not a pipe-dream. It was something that Jarrett must have built successfully. I put together theory about how it operated, based on his book, and presented it at David Ben’s Magiciana. The most interesting part was an analysis of the physics, the stress on the various parts and an explanation of how the person remains “weightless” without any apparent support, without counterweights and trap doors. At some point in the future, I’ll try to turn that talk into an actual explanation. It’s a fascinating principle, and not like any levitation that’s ever been produced.

JARRETT’S FLOATING TIRE. At our 2009 Conference, we displayed a recreation of Jarrett’s Floating Tire illusions, which was developed by a visual artist as an animated sculpture. Again, it proved the efficiency of Jarrett’s illusions, and the amazing principle that he used to create this effect.

JARRETT’S REVOLVING CABINET. I can’t resist including this brief shop tape. That’s William Kennedy in his shop, showing the aluminum construction on Jarrett’s Revolving Cabinet. If you watch it and shrug… What just happened?… I suppose that makes the point! I know that Jarrett would have appreciated the shop, the workmanship, and our modern version of this effect. He did his best work in just this sort of setting, with a prop the had just been assembled and was now ready for experiments.

But here’s a secret. You can take a look at my blog titled A Chance to Watch Kellar, and watch the video starting at 5:30, when Mr. Kellar magically produces Mrs. Kellar. There’s the trick. There’s Jarrett’s brilliance on display.In reality, Jarrett never had a chance to work with Kellar, but because the illusion was inspired by his thoughts about Kellar’s Spirit Cabinet, we thought it was a perfect grace note to put this lost Jarrett trick back in “Kellar’s” show, as an example of old-world ingenuity.

FINALLY, JARRETT HAS SOMETHING TO SAY ABOUT THE SAWING IN HALF. I’ll discuss this in the next blog. His work on this trick was incredible… as you will see. I’ll also discuss the fascinating puzzle of Jarrett’s lost show. Was it called “Jarrett’s Illusions?”